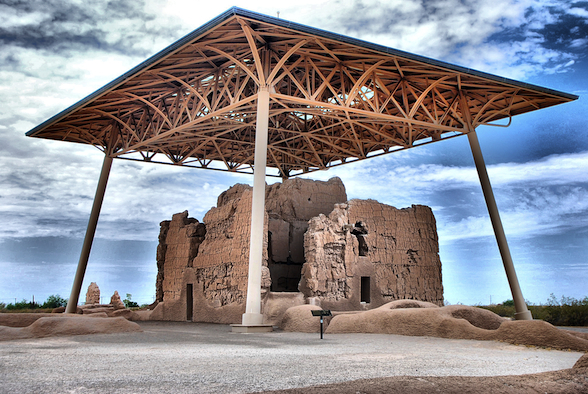 About an hour southeast of Phoenix, adjacent to the town of Coolidge, Arizona, lies the Casa Grande Ruins National Monument.

Presumed to have been built around 1350, Casa Grande is one of the largest prehistoric structures ever built in North America, and its purpose remains a mystery.

“Archeologists have discovered evidence that the ancient Sonoran Desert people who built the Casa Grande also developed wide-scale irrigation farming and extensive trade connections which lasted over a thousand years until about 1450 C.E.

The Casa Grande was abandoned around 1450 C.E. Since the ancient Sonoran Desert people who built it left no written language behind, written historic accounts of the Casa Grande begin with the journal entries of Padre Eusebio Francisco Kino when he visited the ruins in 1694. In his description of the large ancient structure before him, he wrote the words “casa grande” (or “great house”) which are still used today.” (National Park Service)

Before touring the ruins of the ancient Hohokam, we spent about 45 minutes visiting the museum, and also watched an informative 15 minute video.

To help give you a perspective on the scale of Casa Grande, you can see Carol standing at Casa Grande’s front door in this photograph.

Another very interesting fact about these ancient people is that they were very industrious, and created a massive canal system that would bring water from the nearby Gila River.  This canal system allowed them to irrigate the land, and thereby have an agricultural system in the middle of the dry, arid desert.

As we were driving to Casa Grande, the intermittently green fields in the middle of the desert demonstrated that a similar irrigation system is evidently still in use today.  In fact, for miles on our journey, we watched workman building canals along the side of the road.

When you visit Casa Grande Ruins National Monument, you will want to pack a picnic lunch and enjoy watching scores of ground squirrels playing under the shade of the mesquite trees.  Your children perhaps will remember this entertainment the most.

We have visited many prehistoric sites in the Southwest, but this one is by far the largest structure we have encountered, and it is plain to see why this site became our country’s very first national monument.